On the on the 26th of July 1779 at Málaga's parish of San Juan, Lorenzo Nicolás Wassberg, a native of Stockholm, legitimate son of "Don Nicolas Wassberg y Doña María Kansenstierna", married Doña Josefa Ferrari, native of Gibraltar, legitimate daughter of Don Francisco Ferrari and Doña Maria Facila. This entry was added to the marriage register in use three years later, for reasons not explained.

This entry amused me because as anyone who spent time on the Costa del Sol in the 1970s or early '80s will know, the groom was perhaps the earliest forerunner of a huge wave of Scandinavians who would settle there two centuries later. The priest who married him had probably never seen a Swedish name before. The groom's name at home was likely Lars Niklas Wassberg, or perhaps Lars Niklas Wessberg. His mother's surname could have been Lansenstierna, Glansenstierna, Kyulenstierna, Insenstierna, von Krusenstierna...? Perhaps a descendant of this match will emerge through Google to claim his or her Spanish connection! My thanks to Martin Sunnqvist for enlightening me as to the correct Swedish spelling of these names and possibilities.

My Work on Mark Wright's Mendoza Ancestor for 'Who Do You Think You Are?' UK

I'm thrilled that I can finally share some details of an intense few weeks this past Spring squirrelling away in the shadows on the family history of Don Antonio de Mendoza. The resulting research was part of the story presented last night on the British edition of Who Do You Think You Are?

David Mendoza, who appears on screen in the programme, had uncovered much valuable information about his and Mark Wright's shared ancestor; my contribution was essentially to locate more records and to document minute, hitherto unknown details of Antonio's life. Antonio de Mendoza was a tough customer: his career as a fencing master and his later tenacity in getting around an inquisition-imposed travel ban to seek safety in Amsterdam already provided ample evidence of this, but I was thrilled to discover that earlier he had been a 'Guardia de Millones', a sort of armed revenue officer who protected tax money collected for the King. Most of his swashbuckling exploits are lost to us, but it surely speaks volumes how he stated that if forced upon release to remain in Seville unarmed, he would face retribution from a thug whose face he had once slashed in the course of fighting off a robbery, and who had sworn revenge! Also to Antonio's credit, he wasn't a snitch. During two years in an Inquisition dungeon, imprisoned and tortured, he never gave evidence against any of the associates and family members the Inquisitors pulled in after his arrest - as the Inquistion's civil servants noted in his case file, to their increasing frustration.
Mark Wright and his family were clearly touched by Antonio's story. As a genealogist their reaction delighted me, it's the most encouraging response to hours spent squinting at faded pages in poorly heated archives!

Antonio's tribulations will stay with me, among the more memorable cases on which I'veworked; as will the agony of certain other poor souls, contemporaries of his who suffered at the hands of the same loathsome Inquisitors. Two such items I came across among the many pages turned in search of Antonio were the sad tale of the Santander sisters, five young women imprisoned in Seville at the same time as Antonio, for practicing Judaism covertly, and whose only brother cracked during imprisonment and testified against them; and a memo, found among papers of the Madrid inquisition from 1680, noting that someone needed to be engaged to clean out the cage in which the condemned were being burned alive, as unburnt bones were accumulating among the ashed at the bottom. Once again, routine paperwork illustrating the banality of evil.

Posted by Matthew Hovious at 08:54

Email ThisBlogThis!Share to TwitterShare to FacebookShare to Pinterest
Labels: Crypto-Jews, My Professional Research, Spain, Who Do You Think You Are

On 11th November 1648 at the parish of San Lorenzo in the city of Jaén, a blessing (velación) was administered upon the marriage of Antonio de Castro, a merchant, the widowed husband of Leonor Enríquez, and his new wife Doña Ana de Orobio, a native of Madrid, the daughter of Manuel Álvarez Orobio and Doña Mencía Núñez, then residents of Sanlúcar de Barrameda. The priest who recorded the entry specified that Antonio and Ana had been married at Sanlúcar before travelling to Jaén, and that he had seen a notarised copy of their marriage record from that town's church.
From the names of the parents of the bride it is evident that she was a sister of the physician, philosopher and writer Isaac Orobio de Castro, later persecuted by the Inquisition and eventually exiled in Amsterdam.

My Work on Senator Marco Rubio's Ancestry for 'Finding Your Roots' 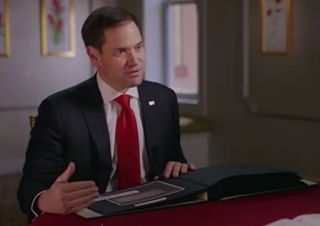 I'm thrilled that my work on Senator Marco Rubio's ancestor José de Reina y Tosta, and the stories associated with that lineage, can now be enjoyed by TV viewers everywhere. As a genealogist, when working on the Reina line and associated families in the Senator's ancestry, I was at times spoiled for choice - there were several families connected with interesting stories, or that showed potential for entertaining development. Ultimately centre stage was taken by José de Reina y Tosta, a diligent public servant who worked hard in many different posts throughout his career in the South of Spain. José never quite rose as high as he would have liked (and it was clear, from the many petitions for advancement that he filed, that for most of his career he felt qualified to take on more demanding posts than those he was usually given by the bureaucrats in Madrid) but ultimately, when faced with a huge public health crisis while he was on duty, he was at last able to prove his worth. José not only held himself to a high standard but, I suspect, was also a no-nonsense parent; though it was mentioned in the broadcast that his son Rafael, from whom Senator Rubio descends, served in the Spanish army, one minor yet significant detail was omitted. Rafael was only thirteen years old when his service began, in the first year of the Peninsular War against Napoleon. Clearly the Reina men were made of stern stuff!

Rescuing stories like these from oblivion and making them known to people living today who value that knowledge is a hugely satisfying aspect of my work as a genealogist.
Posted by Matthew Hovious at 04:30

Email ThisBlogThis!Share to TwitterShare to FacebookShare to Pinterest
Labels: Finding Your Roots, My Professional Research

Irish in Spain (XI): A C18th Husband & Wife between Málaga, Cádiz and Cuba 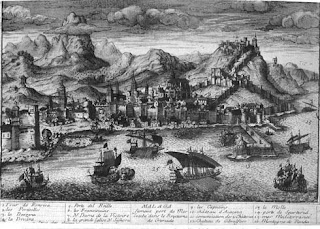 Daniel O'Driscoll, a native of Ireland stated to habitually reside in Cádiz, married Ana Michaela Murfy at the 'Sagrario' of the Cathedral of the city of Málaga on 23 October 1797. He was the son of 'Don Juan O'Driscoll' and 'Doña Leonor Macarthy', the bride being the daughter of 'Don Miguel Murfy' and 'Doña María Porro'. The wedding was conducted through a Power of Attorney granted by the groom to his father-in-law on 11 October 1797 before Cádiz notary Félix Araujo.

Though I've seen many Irish families in the sacramental registers of Spanish cities, what made this find particularly interesting was the death record of the groom - the above entry was taken not directly from the relevant marriage register, but from a transcript in the paperwork presented by the bride when she sought to remarry years later. It included another record stating that Daniel O'Driscoll, native of Ireland, in this case a son of 'Jeremías' O'Driscoll and María 'Macarte' had been admitted to the Hospital of San Felipe and San Juan, in care of the Hospitaller Order of St John, in Havana, where he died on 31st January 1803, aged 29. Fourteen years later his widow, who then resided in El Puerto de Santa María (Cádiz) filed paperwork to marry a Dr. Nicolás Meca.