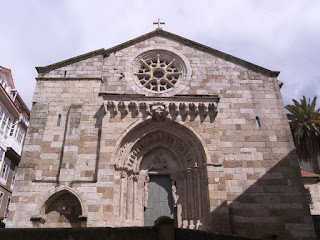 At La Coruña's parish of Santiago on 10 April 1613, Manuel, son of "Guillermo Salder", described as an English gentleman, and his wife "Doña _na" was baptised. The godparents' surnames were abbreviated as "Spta", and they were stated to be Manuel de "Spta", Veedor y Contador de la presente de guerra, and his sister Doña Francisca de "Spta". The witnesses were Captain Mesa, Captain Sigler and Ensign Hidalgo.

Not much to go on in terms of establishing the identity of this caballero inglés. Though his surname is written as Salder, one wonders if he may have been named William Sadler?

Posted by Matthew Hovious at 10:38